The director of the Human Rights Institute of the Universitat de València (IDH), Javier de Lucas, will deliver a lecture entitled “Etsi ius non daretur, a (moderate) praise of the Law on Tuesday, June 5 at the La Nau cultural center. ” The conference, with free admission until full capacity, will take place in the main hall at 6:30 p.m.

With this conference, the IDH will close the ninth edition of the Official Master’s Degree in Human Rights, Democracy and International Justice of the Universitat de València, which was inaugurated by the poet and professor Luis García Montero. Javier de Lucas, professor of Philosophy of Law, Morals and Politics, will launch a diatribe against the widespread contempt for the law that proliferates in the media, to make a moderate defense of the rule of law. “Today, he maintains, we do not live that long the utopian theses, which from Hume to Marx, passing through Saint Simon or Comte, have dreamed of the disappearance of law and jurists, the substitution of the domain of persons (through Law), for the administration of things, but in the foolish and ignores theory that politics and negotiation solve everything and that Law is a dispensable or very secondary instrument, because everything in Law can be changed “. Given these approaches, the professor of Lucas will raise the hypothesis that there was no law (“Etsi ius non daretur”), from there, to base its pondered vindication of just laws and their primacy in social and political relations.

The master’s program in Human Rights, Democracy and International Justice of the Universitat de València, directed by professors Cristina García Pascual and Rosario Serra, has received the Mention of Excellence from the Ministry of Education, which in Spain have only obtained eight master’s degrees legal.

The Institute of Human Rights of the Universitat de València (IDH-UV) has launched in 2018 a broad program of activities, coinciding with the celebration of the 70th anniversary of the Universal Declaration of Human Rights. Created in 2005, the IDH-UV is part of the Consolider project in which twelve research groups from different Spanish universities participate, coordinated by the Bartolomé de las Casas Human Rights Institute of the Carlos III University of Madrid. 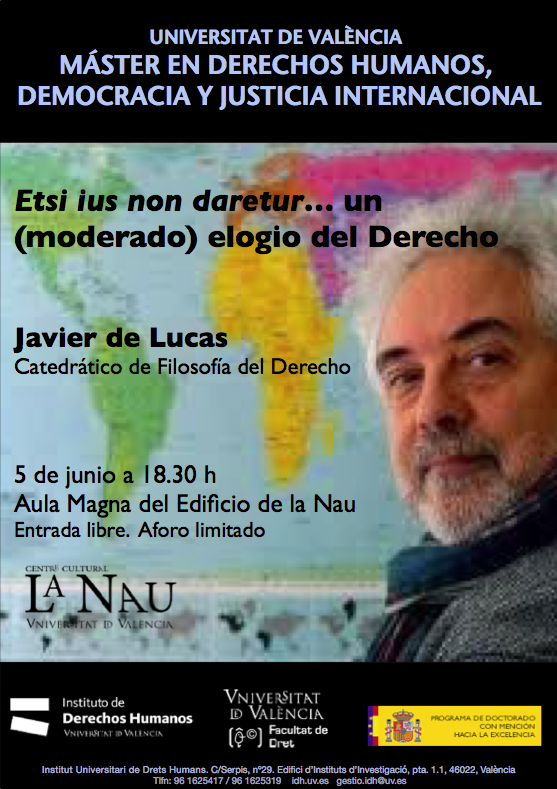