The journalist Ignacio Cembrero analyzes the situation of Muslims in Spain and Europe, as well as the struggle for democracy and human rights in the Maghreb, during two sessions of a seminar organized by the Human Rights Institute of the University of València (IDH-UV), within the framework of the master’s and doctorate program in Human Rights, Democracy and International Justice. The lectures, with free access, will take place on Tuesday, March 6 at 4:30 p.m. (Classroom 4-P12) and on Tuesday, March 27 at 4:00 p.m. (Classroom 1-P20) at the Faculty of Law.

Ignacio Cembrero, a journalist for the newspaper El País for more than thirty years and El Mundo in a short period, has been a correspondent for El País in the Middle East, in the Maghreb, in Brussels and has also been responsible for the monitoring of foreign policy for years Spanish. He took time away from the press to coordinate Meda Democracia, a program of the European Commission to support civil society on the southern shores of the Mediterranean. Formed in Paris, at the Institute of Political Studies and the National Political Science Foundation, he is the author of The Spain of Allah and Distant Neighbors, a book about the tense relations between Spain and Morocco. He has won several awards, the last to the best correspondent granted by the International Press Club.

The master’s and doctorate program in Human Rights, Democracy and International Justice of the Universitat de València, directed by professors Cristina García Pascual and Rosario Serra, has received the Mention of Excellence from the Ministry of Education, which in Spain have only obtained eight master’s degrees of legal scope.

The Institute of Human Rights of the Universitat de València (IDH-UV) has launched in 2018 a broad program of activities, coinciding with the celebration of the 70th anniversary of the Universal Declaration of Human Rights. Created in 2005, the IDH-UV is part of the Consolider project in which twelve research groups from different Spanish universities participate, coordinated by the Bartolomé de las Casas Human Rights Institute of the Carlos III University of Madrid. 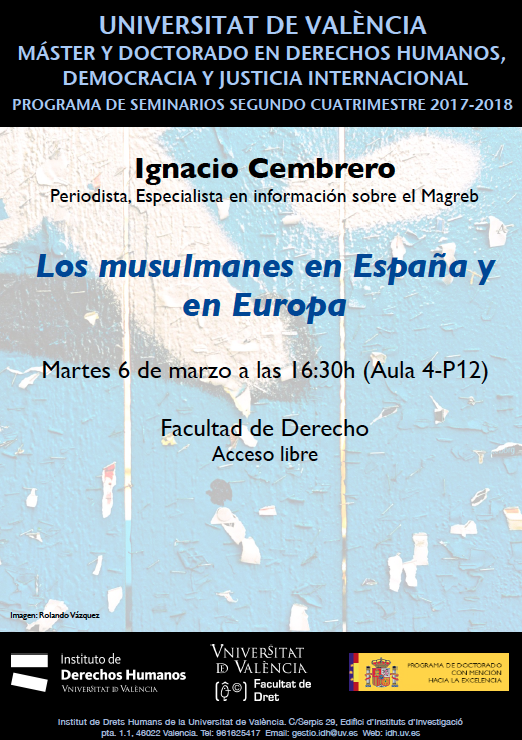