Educate high school students in human rights is the goal of the book, prepared by the Human Rights Institute of the University of Valencia (IDH-UV), presented by the rector, Esteban Morcillo, on Thursday, March 1 (19h) , at the Cultural Center la Nau. The work, directed by Professor Javier de Lucas, combines the classical approach to the keys of human rights with a methodology that actively seeks to involve young people through films, role plays and debate proposals.
The initiative is part of an ambitious program that the IDH-UV will develop throughout 2018, on the occasion of the celebration of the seventieth anniversary of the Universal Declaration of Human Rights. A dozen researchers from the IDH-UV have participated in the preparation of the articles and the didactic material of the work: Cristina García Pascual, José Elías Esteve, Raquel Vanyó, Belén Cardona, Ángeles Solanes, María Dalli, Ruth Mestre, Andrés Gascón, Consuelo Ramón and Javier de Lucas. In the act of presenting the book that bears the title “Per què el drets humans”, will intervene with the rector, Esteban Morcillo, the regional secretary of Education, Miguel Soler, the director of the Tirant lo Blanch publishing house, Salvador Vives and the director from the IDH-UV, Javier de Lucas. The editorial project has had the support of the Generalitat Valenciana, through the Ministry of Education, Research, Culture and Sport, as well as the Cefire.
Although the activities of the HDI-UV are basically focused on the research and training of postgraduate students, according to its director, “the Institute of Human Rights is also committed to a wide dissemination and dissemination of the culture of human rights, through the development of resources and pedagogical material, as well as an offer of training that includes other educational fields from informal education to secondary education “. Thus the IDH-UV, in addition to giving lectures and dissemination talks in secondary schools, has started a pilot experience with European baccalaureate students in which Erasmus students of the degree of Law collaborate. So this book, adds the professor of Lucas, “is a simple and clear manual that aims to be a tool of help for high school teachers interested in the culture of human rights and also, obviously, for the students themselves.”
In the first part of the work, a synthetic notion of the history of the recognition of human rights and an approach to the main types of human rights is offered, ending with a question that the authors consider key: “how to exercise and Protect our rights? What can we do? What should we do? ” . And in the second part of the book, they propose examples and discussion tools (taken from cinema, literature, or role plays …) to animate group dynamics in the classrooms about concrete rights and their violations: macho violence, other violence as bullying, hate crimes, xenophobia and racism, management of cultural diversity, limits on freedom of expression, economic, social and cultural rights, on the notion of memory and, even, on the controversial issue of the rights of animals. The work is completed with a small legislative compilation that includes standards of scope, international, European, state and regional. 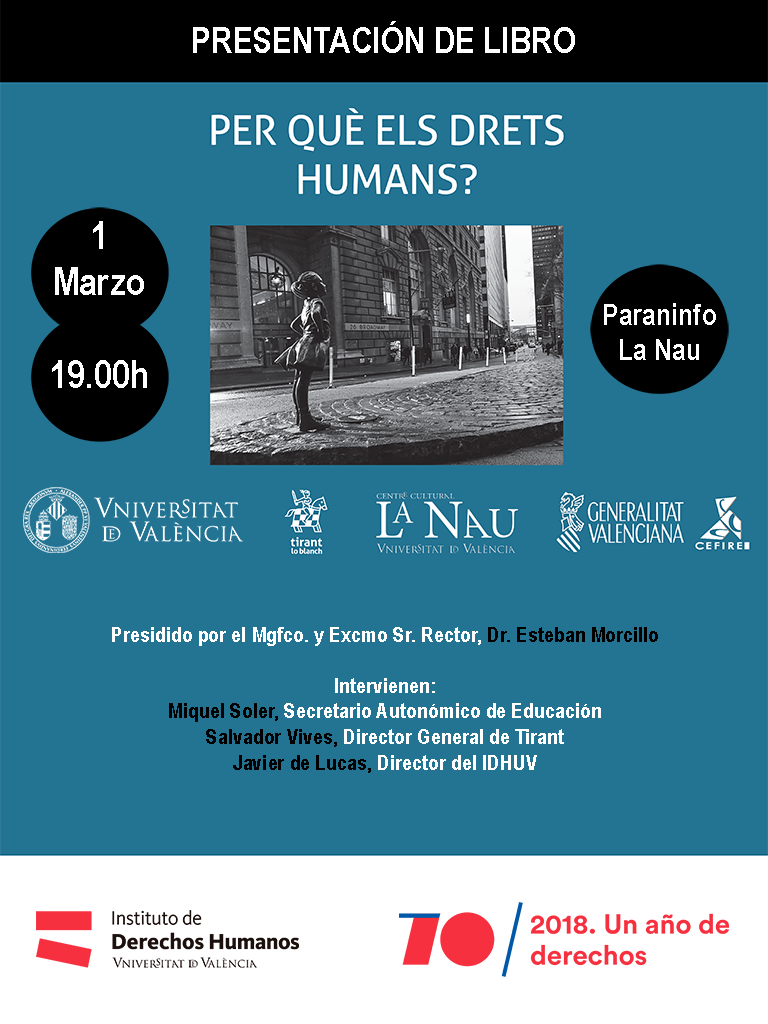